How I wrote (another) book 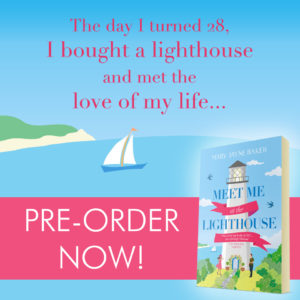 Ignore that title, it’s a fib. This isn’t really a post about how I wrote a book because no author really writes a book. They build a book, layer on layer, putting in, taking out, kneading disjointed scenes and chapters back together like word dough until they have something that reads like a seamless story. This is a post about how my word dough became a book.

I started writing my second novel, Meet Me at the Lighthouse, in March 2016. Although it will be the second book I’ve had published, it’s actually the third manuscript I’ve completed – the second, a romantic comedy about a pub quiz team in the Yorkshire Dales, is currently sitting in editing purgatory until I have time to pay it some attention.

I started Meet Me with a one-word premise: lighthouse. From the days of my Portland Bill wallpaper, aged four, I’ve loved lighthouses: something about that isolated, haunting quality they seem to have, I think. I was intrigued by the idea of using one in a novel; not just as a setting, but as a key part of the plot.

So I improvised the first scene, in which my hero and heroine meet at said lighthouse, then plotted out the rest. Some writers like to have a complete plot before they write a word, “pantsers” prefer to wing it, and for me it’s somewhere in between: improvise a scene or two, plot, a few more scenes, replot, and so on. I rarely do character sheets before starting work: I prefer to write scenes for them and get to know them as I go. Even scenes that are eventually cut can be an important way to learn about and develop your characters.

I decided my lighthouse was going to be a music venue on the Yorkshire coast, because wouldn’t that be just amazing? And as with my debut novel The Honey Trap, which I’d written during NaNoWriMo the November before, I set myself the target of writing 2000 words a day minimum until in six weeks I had a first draft.

Like all my first drafts, it was a bloated thing – 115,000 words – and even after editing and polishing, it was still far too long. I’ve worked as a professional copy-editor and proofreader in my day job for over a decade, which you might think would mean that the edit would be the easy part, but there’s actually nothing I find harder. It’s difficult to hack apart your own work, which you know almost by heart, and structural editing – fixing problems with pacing, plot and consistency – is a very different thing from cleaning up typos and grammar errors. However, I was still pleased enough with my work to start subbing it to agents, which is how I got my lovely agent Laura Longrigg at MBA.

And that was when the work really started! It was wonderful to work with an agent with a strong editorial background, and Laura’s suggestions on plot, pace and characterisation were invaluable. After four rounds of edits, I had two new characters, many new plot developments and I’d cut 20,000 words from the length. It was a slog but it was worth it; with Laura’s help I managed to make it a much stronger book than it had been when she signed me, and I’ll always be grateful that she saw its potential from the start. A new two-book contract was negotiated with HarperImpulse, my publisher for The Honey Trap, and the manuscript delivered to them.

But just as I was breathing a sigh of relief that all the hard work was over, along came another round of structural edits from the publisher. Another couple of rewrites, working with my fabulous editors Charlotte Ledger and Samantha Gale at HarperImpulse, added new backstory and plot developments, and addressed some issues with pacing. Then came the line edits, then the copy-edits, and then, at last, the words were a book! The final wordcount for Meet Me is around 85,000 words, but I’d estimate I must’ve produced twice that many if you include material that was cut or rewritten. I wouldn’t be surprised if I took out more than I put in. Which sounds soul-destroying, but actually, once done, I felt strangely cleansed – and the book felt a lot more streamlined.

So in summary, writing-layering-creating a book is hard but amazing, and easily the most rewarding thing I’ve ever done. Please remind me I said that when I’m mired in edits on the next one, groaning softly…

Meet Me at the Lighthouse is out from 30th June and available to preorder now.