Mysterious disappearances are rocking the well-tended flowerbeds of Kettlewick. Could there be more to handsome newcomer Callum than meets the eye? 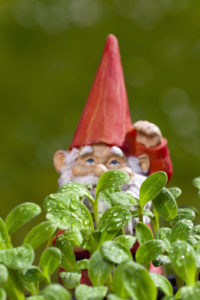 Abby squinted through the peephole of her front door. Her elderly neighbour Mr Hunter beamed back, his head distorted to mammoth proportions by the glass.

‘Is everything ok, Mr Hunter?’ she asked when she’d opened up.

‘Fine, fine. Sorry to call so early. It’s about this business in the village.’ He glanced warily around the sleepy cul-de-sac. ‘The robberies,’ he mouthed.

‘Yes, I heard,’ Abby said. When you lived in a community like Kettlewick, average age of seventy-five and pension day the highlight of the social calendar, a spate of garden thefts was big news.

‘This modern world,’ she said, shaking her head soberly. ‘It’s come to something when old ladies have to start alarming their gnomes.’

‘Quite. That’s why I popped round. Young girl like you, all on your own… well, I thought these might prove useful.’

Mr Hunter reached into his pocket and yanked out a pair of huge white Y-fronts.

‘They’re mine,’ he told her proudly. ‘All washed and pressed.’

‘Do you mind if I ask why you’ve brought me your pants, Mr Hunter?’

He lowered his voice. ‘Police believe the thieves are deliberately targeting ladies who live alone. And it can only be a matter of time until they take the next step. Housebreaking!’

‘So… I should garrotte them with your undies?’

‘Hang them on your washing line. Then if they come for your begonias, they’ll think you’ve got a man about the house.’

Mr Hunter looked so pleased with this cunning plan of his, Abby didn’t have the heart to send him and his undercrackers packing.

He headed back next door, leaving Abby blinking at the baggy Y-fronts.

‘Not really your colour, are they?’ a deep voice observed. She looked up to see a young man with laughing eyes leaning against a removal van parked across the road.

Abby hastily stuffed the pants in the pocket of her dressing gown. ‘My neighbour. He, um… has these ideas.’

‘Racy neighbourhood. The best I’ve ever been offered is a cup of sugar.’

Her cheeks flamed. Something about the twinkle in the man’s dark eyes – not to mention the fact he’d just caught her in her dressing gown, manhandling an OAP’s tighty-whities – seemed to have brought on her blush reflex.

He came over and held out a hand.

‘Abby Samson,’ she said, shaking it. ‘So you’re this grandson Mrs Beresford loves to boast about. The landscape gardener, right?’

He smiled. ‘Shameless, isn’t she?’

Abby glanced at the removal van outside Number 35.

‘Your grandmother isn’t moving out, is she?’

‘No, I’m moving in,’ Callum said. ‘Nana’s been struggling a bit since my grandad passed away. She gets… confused. It was a choice between me coming to help out or a care home, so, here I am.’

Abby was impressed. Callum Beresford must have a pretty 50-carat heart beating underneath the roguish grin to drop his old life just like that.

‘Well, nice to meet you, Callum,’ she said. ‘Welcome to Kettlewick.’

Every muscle in her body was aflame. It was safe to say she wasn’t one of nature’s joggers.

‘Lightweight.’ Her friend Sal grinned. ‘I thought you wanted to get in shape.’

Sal laughed. ‘Go on, we’ll take a breather then.’

As Abby recovered and her breath returned, her hazy vision started to clear. They were on Wisteria Lane, the balmy air drenched with violets and pollen. Further down the road she could see a figure in one of the gardens, sidling furtively.

Suddenly she threw herself down behind the hedge, pulling Sal with her.

‘Ow! What did you do that for?’ Sal said, rubbing her arm.

‘Callum Beresford. He  just moved in across the road.’

‘And we’re hiding from him because…?’

Sal peeped through the topiary.

‘Never mind that. What’s he doing?’

‘Can’t see. He’s putting it under his coat… getting into a car…’

Abby heard the purr of an engine as Callum sped away.

‘So what was that all about?’ Sal asked as they stood up.

‘Not sure.’ Abby shot a worried look after the car. ‘But I’ve got a bad feeling.’

It was 2.15am and Abby was staring at her bedroom ceiling.

‘The man’s a landscape gardener,’ she muttered. ‘So why shouldn’t he be in a garden? Abby Samson, you’re ridiculous.’

But he’d taken something…

Oh, this was silly. Landscape gardening couldn’t be so badly paid that Callum needed to flog pilfered gnomes on the side.

Maybe he was some sort of garden-obsessed kleptomaniac. Once he clocked an unguarded clematis, he couldn’t help himself. He just had to –

Abby stopped. There was a shuffling sound coming from outside.

Ugh, not Mr Hunter’s Yorkie digging up her flowerbeds again. The little bugger was a dab paw at escapology. She got out of bed and tramped downstairs.

When she reached the kitchen, she stopped short. In the faint orange glow of a nearby lamppost she could see a shadowy figure, armed with trowel and fork, digging in her begonia patch.

She unlocked the back door and flicked on the porch light.

The silhouette looked up at once. It rose and walked towards her.

Well, we all have to go some time, Abby reflected, feeling light-headed. Some go quietly in their sleep, others get hacked to bits with garden implements.

‘Aha!’ she yelled when the figure reached her, snatching up an old dishcloth. She held it up in front of her like a matador, which seemed to make sense at the time.

Only it wasn’t a dishcloth.

‘What’re you planning to do, smother me with them?’ Callum asked in an amused voice.

‘You’re the one who’s been preying on lone women’s shrubberies! Aren’t you?’ She raised the pants a little, feeling safer behind their broad expanse. ‘Mr Hunter said you’d be after my begonias.’

‘After your…’ Callum shook his head. ‘Abby, I swear, my intentions towards your begonias were entirely honourable.’

‘Yeah? I saw you on Wisteria Lane today.’ She gave Mr Hunter’s pants an accusing flap. ‘Sneaking something into your jacket.’

‘It wasn’t what it looked like, I promise. Look, can I come in?’ Callum glanced down. ‘And could you stop pointing those underpants at me in that threatening manner?’

Abby’s eyes were wide. ‘Your nana?’

‘But I saw you take something.’

‘No, you saw me swap something.’ He sighed. ‘It started when Grandad died. He’d promised Nana her dream garden, but he passed away before he could finish it.’

‘…Nana’s finishing it. She sees something she wants, she takes it. Abby, she doesn’t realise it’s wrong.’

‘And you’ve been putting everything back.’

He nodded. ‘Then a quick trip to the garden centre, replace it before she notices.’

‘What were you swapping?’

‘Gnome mix-up. Mrs Callaghan got the lad in the Union Jack briefs belonging to Mrs Florizel.’ He shot her an anxious glance. ‘You won’t tell anyone, will you? About Nana?’

‘Course not.’ She looked up to meet his gaze. ‘I’m sorry I accused you, Callum.’

‘And threatened me with loaded pants.’

‘Abigail!’ Mrs Beresford said when she answered her door the next day. She was heavily made-up as always, in a flapperesque sequinned dress. ‘Dear girl! Come in at once and have a sherry.’

Overruling Abby’s objections, Mrs Beresford got them drinks. Abby claimed an armchair and sipped at the syrupy alcohol, feeling like Christmas.

‘So what brings you to see me?’ Mrs Beresford asked.

‘A present.’ Abby handed over the gift bag she was holding.

Mrs Beresford peeked into the bag and squealed.

‘Handsome devil!’ she breathed, taking out the garden gnome in his red smoking jacket. ‘Oh, I must see how he looks with the others.’

Abby followed her out to the garden, where Callum was planting sweet peas. He wiped dirty hands on his jeans and joined them.

He nodded to a cluster of garden gnomes around a little pond.

‘Go on, Nana, do the honours,’ he said, giving her a squeeze. His grandmother tottered happily off down the crazy paving.

It wasn’t what you’d call a tasteful garden. Gnomes and colourful ornaments abounded. Mismatched flowers in yellow, pink and blue socialised with joyous energy, but no real harmony. Yet it was obvious that to Mrs Beresford, her jolly, haphazard little garden was a slice of paradise.

‘So is this revenge then?’ Callum muttered to Abby.

‘It was supposed to be an apology.’

‘Seriously? Do you know the pain it gives a landscape gardener, all those gnomes?’ He smiled as he watched Mrs Beresford select a spot next to a coy Marilyn Monroe gnome for her new addition. ‘They make her happy though. Thank you.’

‘I really am sorry I accused you of shrub theft.’

‘And I’m sorry I interfered with your begonias.’ He turned to face her. ‘Let me make it up to you?’

As if reading their expressions, Mrs Beresford finished gnome-matchmaking and turned her attention to them.

‘Do you have lunch plans, Abigail?’ she called. ‘Callum’s taking me to the Black Heifer.’

‘Will you join us?’ Callum asked. ‘My treat? I do feel really bad about those begonias.’

He was looking at her keenly, dark eyes sparkling.