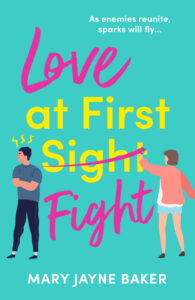 Sorry to everyone watching my Facebook Live with Alison May tonight who lost sound at the end of the broadcast. For anyone who wants to read it, this is the extract I was in the middle of reading from Love at First Fight (out 5th August).

‘Well, you know. I’m a rebel.’ Bridie glanced around at the sound of approaching footsteps and groaned. ‘Oh God.’

Joel followed her gaze to Ben, who was making a beeline for their table with a big grin on his face. ‘You know that guy?’

‘All right, ?’ Ben said when he reached them. He leaned over the table to help himself to a chip. ‘Still alive then, are you?’

She flashed him a wide smile. ‘Well I almost pined away when you went off on your geriatric gap year, but then I don’t know, after about ten minutes I somehow seemed to make this miraculous recovery. How’s your substitute penis?’

‘The Audi? Just like the real thing, love: sleek, sexy and ready to ride.’

‘Mmm. Or over-hyped, over-polished and comes too quickly.’

Ben looked Joel up and down as if he were some sort of specimen impaled ready for dissection, taking in his man bun and selection of Spice-themed tattoos. ‘What number’s this one then, Bride?’

‘Bloody Cal, I’ll kill him,’ she muttered. She summoned a smile for her date, who was watching their gleeful bickering with a puzzled expression on his face. ‘Um, I’m out of wine here, Joel. Do you think you could pop to the bar and get us another couple of drinks?’

‘Have you got any money?’

She lifted an eyebrow. ‘Seriously?’

‘Of course, you’re right. And I only bought the last two rounds, how selfish of me.’ She pushed her empty glass towards him. ‘Just tell Pete to stick it on a tab. I’ll settle up when I leave.’

‘Well, what number date is it then?’ Ben asked when Joel had gone to the bar.

She glared at him. ‘Nineteen, if you must know. And please tell your brother from me that he might want to start wearing a cricket box when he comes over to ours.’

‘So how are you finding Joel?’

She grimaced. ‘All right, so he’s not a music producer. But he’s still pretty cool.’

Ben leaned over her to take the last chip. ‘What’re you two planning to do after this? Will it be the standard post-date shag, do you think, or will you be spending the night picking through Mel C’s bins together?’

She scowled at him. ‘Have you been eavesdropping on us?’

‘No thanks. Joel might be boring, obsessive and tight as fuck, but I’ll still take his Spice Girls fixation over your tales of sleeping with the entire female population of Brazil.’

‘Whatever.’ She cast a glance over his deeply tanned arms and curled her lip. ‘You look like you’ve been Ronsealed. What do they call that shade, Werther’s Original?’

He grinned. ‘Missed you, Bride.’

‘You’re looking pretty sexy yourself,’ he said, looking over her outfit of yellow strappy top and skinny jeans. ‘I’m told you’re into wearing thongs these days.’

‘Tell Cal to make sure that’s a steel-lined cricket box, will you? Because just for him I’m about to get into wearing hobnailed boots as well.’

‘It was only a matter of time.’

She nodded to his jeans. ‘You do know your flies have been undone the whole time we’ve been talking, right?’

Bridie smirked as he cast a worried glance in the direction of his crotch. ‘Made you look.’

‘Funny.’ He nudged her. ‘So do you think you’ll be going back to Joel’s place later, or is it a cosy night in with the alternative entertainment you’ve got hidden in your knicker drawer?’

She looked up to smile dangerously at him. ‘Bend over and I’ll show you.’

‘Hey, don’t threaten me with a good time.’

‘Look, just sod off, Kemp, can you? Go back to Darkest Peru, see if you can get a job making marmalade sandwiches for Paddington Bear or something.’

‘Come on, Bride,’ he said, putting an arm around her shoulders. ‘Ditch Joel and come have a drink with us. You can have lots of fun insulting me and I promise I won’t tell a single story about my many sexual conquests on the South American continent. Although you’re right, there were loads.’

‘Nope. Fine where I am, thanks. And look, here’s my date back again.’ She shrugged off his arm and fixed her face into a smile as Joel arrived with their drinks and a couple of bags of crisps. ‘Cheers, honey.’

‘Hope you don’t mind, I stuck a couple of bags of Kettle Chips on your tab as well,’ Joel said as he sat back down. ‘I spent all afternoon in the gym working on my deltoids so I’m craving carbs tonight.’ He cast an underwhelmed glance at Ben. ‘Oh. Your friend’s still here.’

‘I know, he’s failing to take the most obvious of hints,’ Bridie said. ‘He thrives on attention though. Just ignore him and he’ll soon go away.’

‘I was going anyway.’ Ben clapped Joel hard on the shoulder. ‘Look after this one, mate, she’s a real treasure.’ He winked at Bridie before strolling back to his own table.

Bridie scowled after him. God, she hated that guy.