Exclusive extract from The Never Have I Ever Club 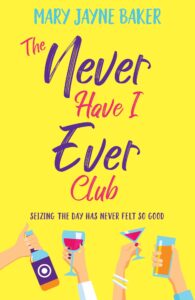 A big happy pub day to my latest book baby, The Never Have I Ever Club! From burlesque dancing to Swedish massage, the villagers of Kettlewick have plenty of bucket list activities they’re keen to tick off. You can read an exclusive extract from the book below, as heroine Robyn discovers how members of her new club have been carpeing their diems in their spare time.

Robyn turned to Cliff and Linda Cockburn. ‘Anything to report, you two? You had some sort of special day out planned, didn’t you?’

‘Ah. Um, yes.’ Cliff had gone a bit pink, and seemed to be avoiding the eye of the Brigadier opposite him. For his part too, the Brigadier was looking anywhere but at Cliff. ‘Well, we went.’

‘It was… fine.’ The corner shop owner ran a finger under his collar. ‘Huh. Very enjoyable.’

Felicity grinned at him. ‘Come on, Cliff, there’s no point getting prudish about it now. Tell them what happened before I do.’

Cliff stared at her. ‘You wouldn’t.’

‘Of course I would. I was laughing for three solid days.’ She looked him up and down. ‘I mean, nothing personal.’

Robyn tried to remember what Linda’s contribution to the group bucket list had been.

Skinny-dipping, that was it. Robyn remembered her waxing lyrical about the excitement of feeling the open air on your skin, the dangerous thrill of potentially getting caught…

‘You didn’t get yourselves arrested for indecency or something, did you?’ she asked, her eyes widening.

‘Oh, no, nothing like that,’ Linda said. ‘No, you see, after the first meeting Cliff and I decided we’d like to do something that would stand for posterity, if you know what I mean. Something to impress the grandchildren.’

‘Well, Cliff wanted to see if we could get a part as extras in a film. That did sound fun, but when we looked into it there weren’t any opportunities coming up. But, er…’ She coughed. ‘There was something happening.’

‘A sort of performance art thing. You know that famous artist who does the, er… the photos of crowds of nudes?’

Freya choked on a snort.

‘What, you mean you and Cliff—’

‘They painted themselves blue and rode up and down an escalator with a load of other stark-naked Smurfs,’ Felicity said matter-of-factly. ‘Definitely one to share with the grandkids. It’ll be like playing Where’s Wally? with Grandpa’s bum.’

‘How do you know so much about it, Fliss?’ Robyn asked.

Felicity grinned. ‘Because Norman and I were there with our bums painted blue too.’ She nudged her bright red fiancé. ‘Weren’t we, dearest?’

The Brigadier cleared his throat. ‘Yes, well. It gets you out of the house, doesn’t it?’

Will shook his head. ‘You think you know someone.’

‘So do you think you’ll be doing any more performance art?’ Robyn asked the Cockburns.

‘No, I think we can tick that one off now,’ Cliff said, still avoiding the Brigadier’s eye. The experience of encountering each other by chance, todgers out and painted blue, had clearly traumatised them. Certainly, their Rotary Club dinners were unlikely to ever be the same.

‘Moving on,’ Robyn said. ‘Winnie. Any progress on your tattoo?’

‘Can we see, or is it somewhere you’d rather not show us?’

Winnie sighed. ‘It’s still healing but yeah, you can see.’

He rolled up his sleeve to display the fresh ink on his lower arm.

Will squinted at the artwork. It was very detailed, like a pencil sketch, and looked as if it might have been copied from a photograph. Underneath was a scroll bearing the words: Sleep well, Jarvis, loyol freind: 2004–2019.

Robyn frowned. ‘You mean you got a memorial tattoo for a dog you don’t know?’

‘I didn’t mean to,’ Winnie said in a pained voice. ‘I wanted a lion but the tattooist had muddled his appointments. He thought I was someone else.’

‘Why didn’t you say something?’

‘Well, I didn’t like to be rude. He’d obviously put a lot of time into the design.’ He looked at his arm and grimaced. ‘I wish he’d been a better speller though.’

‘Didn’t he show you it first?’ Freya asked. ‘Normally they do a wipe-off transfer so you can confirm you’re happy with it.’

Winnie pulled a face. ‘He did, but… you remember the old days, when people got tattoos to show how hard they were?’

‘This guy was very old school,’ Winnie said, shuddering. ‘There wasn’t a bit of him that wasn’t inked or pierced, from his bovver boots to the top of his shaven head. He had this sort of menacing look in his eye when he asked if I was happy to go ahead, as if he was defying me to criticise his design, and I…’ He groaned. ‘I just smiled and said yes, that’ll be lovely, thank you.’

‘He must know now though,’ Freya said. ‘I mean, I presume Jarvis’s real dad turned up eventually.’

‘He did. And to be fair to the bloke, he did give me my money back.’

Robyn shook her head. ‘Winnie. Are you saying you got a complete stranger’s dog tattooed on your forearm for all eternity out of social embarrassment?’

Robyn noticed Felicity shaking with silent laughter behind her hanky and turned her head slightly.

‘But you can’t go through life pretending you once had a much-loved dog called Jarvis when you didn’t,’ she said. ‘Have you ever had a dog?’

‘I could pretend Jarvis was the name of an ex,’ Winnie said, twisting his arm to examine the tattoo.

‘Right. An ex who died this year, aged fifteen, and really liked dogs.’

‘Okay, maybe not,’ he conceded. ‘I’ll just have to go with my back-up plan and wear long sleeves forever. I’ll miss swimming, but that’s a small price to pay.’

‘This is literally the most British thing I’ve ever heard,’ Will said.

‘God help me,’ Robyn heard Eliot mutter. ‘The man I love’s called Winston Prenderghast and he’s got a stranger’s dead Pomeranian tattooed on his arm.’

She raised an eyebrow. ‘El, did I just hear you use the L-word?’ she whispered.

The rest of the group hadn’t fared much better than poor Winnie with their bucket list tasks. Albert Jeffries was limping for a reason he refused to divulge, although on the plus side, he and his wife had finally decided to call it a day on the DVLA and apply for an allotment instead. Jane Siegfried, the lady who’d wanted to learn to play poker, had managed to lose £800 of her savings in an online casino. And Eliot had been forced to give up the ukulele after developing blisters that made it too painful for him to hold his homework-marking pen, much to the delight of his class.

Robyn rested her chin on one fist as Mr Ansari from the library talked them through the various genealogy archives available online.

This wasn’t how the club was supposed to be. No, this wasn’t right at all.