The Honey Trap – the front page

To celebrate getting my first reviews this week, I made Seb and Angel’s front page, below with an extract from chapter four. The Honey Trap available to preorder now! 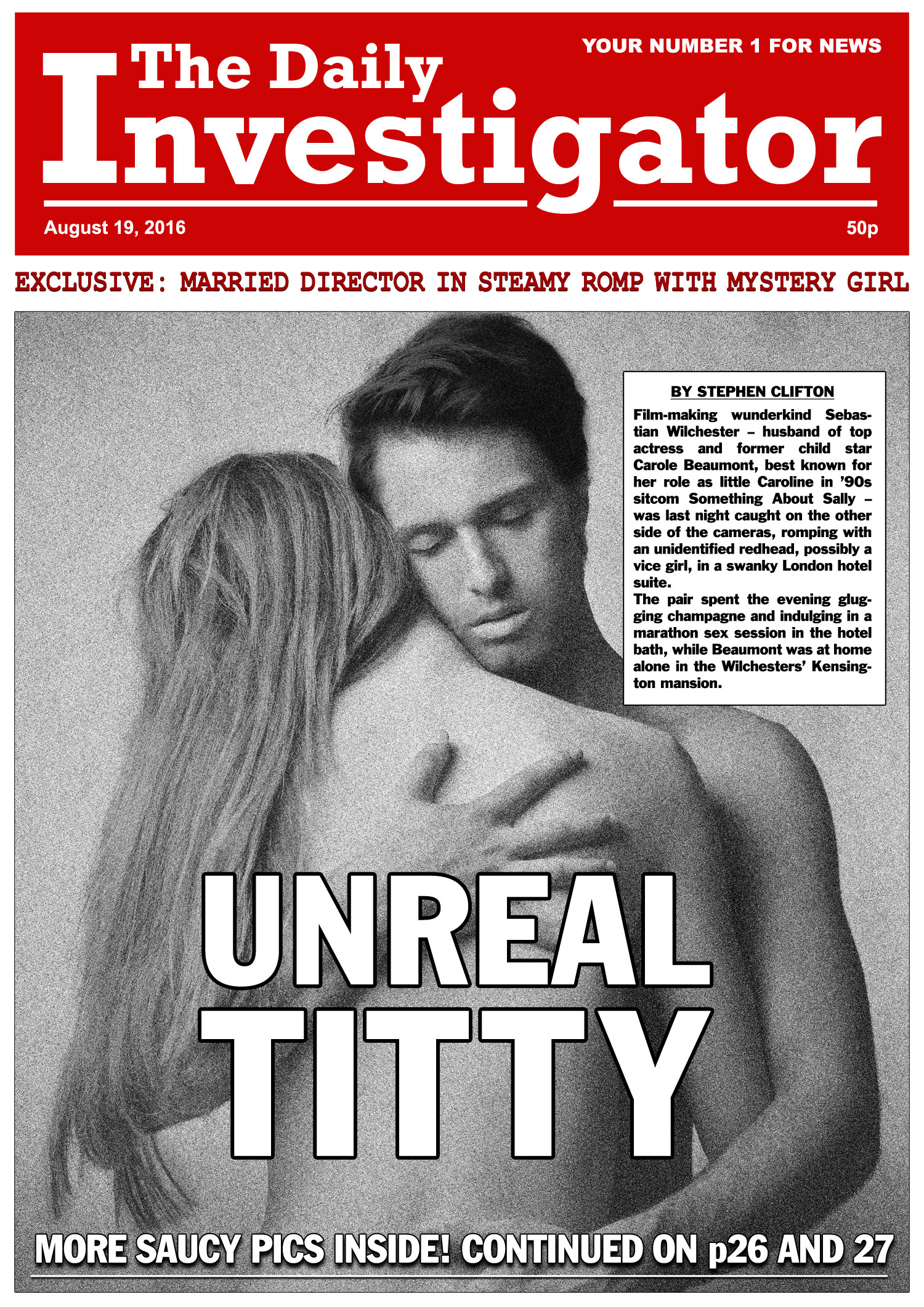 Angel’s heart pumped in her throat as she scanned the front page.

Not one of Steve’s best headline efforts. He’d gone with ‘Unreal Titty’ – a pun on the name of Wilchester’s first film, Unreal City – emblazoned across a woman’s naked back. Hers. She winced deeply. A sub-head read ‘EXCLUSIVE: married director in steamy romp with mystery girl’.

You could see Seb’s face, contorted with passion, over her shoulder as she straddled him on the bed. She felt a zing through her body, remembering the thrill of sitting astride him and guiding him down into the crisp white sheets, panting and wet after their bath together –

‘No, you don’t get it!’ Angel groaned. ‘That shot – how did he get that? I hung a towel over the mirror! It must have fallen – that perve!’

Emily’s eyes widened as she caught on.

‘Jesus, you don’t mean Steve watched it all!’

Angel bunched her fists into her eyes and moaned. As if anything was needed to make her humiliation more complete. Not only did she have one stonking bastard of a hangover. Not only was her bare backside splashed across the front page of a national newspaper for all to see. Not only had she, Angel Blackthorne, spent her Friday night having oral sex with a married stranger in a hotel room. But now it turned out her letchy old boss had watched the whole thing!

Emily patted her hair, putting on her best comforting tone. ‘Look, sweetie, it might seem like you want the earth to open right now, but give it a week and this’ll all be forgotten, I promise. Just tomorrow’s chip paper, right? And as for Steve, he’s sleazy, but he’s professionally sleazy. I’m sure it’s nothing he hasn’t seen before, if that makes you feel any better.’

‘How the hell is that supposed to make me feel better?’ Angel gave another long, muffled groan, hiding her face in her hands. ‘Just leave me, Em, leave me to die…’

‘Oh come on. I didn’t spend my hard-earned wine drowning your sorrows just so you could have a relapse next day. Look, I’ll get some coffee on. That at least might help deal with the hangover part of your symptoms.’

Fighting the surge of nausea, Angel pulled the paper towards her and began to read with kamikaze resignation:

Film-making wunderkind Sebastian Wilchester – husband of top actress and former child star Carole Beaumont, best known for her role as little Caroline in ’90s sitcom Something About Sally – was last night caught on the other side of the cameras, romping with an unidentified redhead, possibly a vice girl, in a swanky London hotel suite.

The pair spent the evening glugging champagne and indulging in a marathon sex session in the hotel bath, while Beaumont was at home alone in the Wilchesters’ Kensington mansion.

Angel felt her cheeks blazing with anger and mortification. If she’d been in any doubt Steve had stayed for the whole show, it was now utterly squashed.

A red flash in the corner promised ‘MORE SAUCY PICS INSIDE! Continued on p26 and 27’.

She flicked in panic to the double-page spread and experienced a surge of relief when she saw that none of the photos showed her face or anything that could identify her. Steve may be a scumbag, but he had principles of sorts, and an absolute commitment to protecting his sources was foremost among them. Thank Christ she’d wimped out of getting that tattoo on her bum at uni, though.

Inset was a photo of Seb and his wife Carole on their wedding day, the bride glowing in a creamy silk and Seb beaming as he curled a protective arm around her. Angel felt a twinge of shame and guilt when she took in the couple’s bright, happy faces.

The Palme D’Or-winning screenwriter and director, pioneer of the East End Noir genre, has been dubbed the saviour of the British film industry and a modern-day Orson Welles since his breakthrough film, Unreal City, was released to critical acclaim when he was just 22.

Neither he nor his wife of six years, former childhood sweethearts, were available to comment when contacted by our reporter. However, their lawyer has issued a statement asking for the couple’s privacy to be respected at this difficult time.

Wilchester, 30, and Beaumont, 28, had just completed work on their forthcoming film, The Milkman Cometh – a rare foray into black comedy for the director and his wife/leading lady.

‘I didn’t realise who he was when he ordered a drink at the hotel bar,’ said our source, a hotel employee who witnessed the encounter between Wilchester and his flame-haired temptress. ‘But I saw him meet up with this girl and they couldn’t seem to keep their hands off each other. I don’t know but it looked like it had been arranged in advance, and I noticed he wasn’t wearing a wedding ring. He bought her a drink and they were flirting for a bit, then he went upstairs to her suite. The maid said he left looking dishevelled the next morning.’

Angel sank down against the arm of the sofa and moaned softly. What an almighty mess she’d managed to make of her life, her love life and her career, and all in the space of one weekend! God only knew what the next day at work would bring, but a massive bollocking piece of her mind was definitely on an unstoppable collision course with Steve’s face.