I wanna tell you a story… 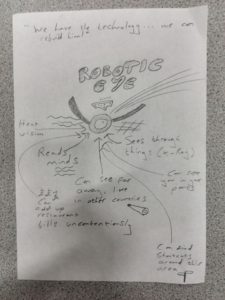 I couldn’t find a picture to go with this, so here’s a design for a robotic eye I did last year

Sit down. I wanna tell you a story, to quote the late, great toothbrush fancier and crooner Max Bygraves.

Are you sitting comfortably? Then I’ll begin. Once upon a time there was a small child who dreamed of one day being a writer. Possibly in a lighthouse, or a spaceship.

Sorry, sorry, lost the thread… where was I? Oh yes. The little child dreamed of being a writer, and she wrote and wrote: bizarre, often plagiarised fantasy tales of shrinking unicorns, psychic twins and magic frogs, convinced through the cocky optimism of youth that one day her dreams would all come true.

Many years later, the little child, grown to adult’s estate (well, sort of) was studying English at Durham University. She decided now was the time to make the dream a reality. So she sat at a keyboard and she started tapping out a story. A romantic story, about a journalist with red hair who takes no sass from nobody, and a sexy man with unruly chestnut curls…

But it turns out writing is hard, man. Three thousand words in, the child-student-woman looked at what she’d written, dismissed it as a pile of utter tosh and hid it away in a folder on her computer, never to be looked at again.

And that could have been the end of the story. Three years of studying the greatest works of literature ever written left, alright let’s drop the third person already, left me (ahhhh, you never saw it coming, eh?) with a big confidence problem and no wish to write ever again.

Some ten years later, I finally got the urge to pick up a pen again. My writing didn’t have to be good, I reasoned. It didn’t have to be read by anyone to be balm for the soul. So I started scratching out bits and pieces, usually non-fiction, until eventually I could read it back and think “you know, some of this isn’t all that bad”. I even got up enough nerve to let others read it. And finally, I found I was having my little bits and pieces of articles published in local magazines – and that people were enjoying them, and telling me they wanted to read more.

But it took NaNoWriMo – which, for those not in the know, is short for National Novel Writing Month – to finally make me go back to fiction.

It started with a challenge: my boss, hearing my tongue-in-cheek claim that I could’ve been the next big thing on the romance scene if I’d finished my university novel (also that I’d had the original idea for Harry Potter and I could easily have been a pro cage fighter), told me I should dig it out and go back to it. That got me thinking… maybe there could be a novel in me after all. Still, if I hadn’t discovered the NaNoWriMo forums and the fabulous supportive community there, I don’t think the story in my head would ever have made it to paper.

Armed with a new mantra provided by my NaNo forum buddies – push on into the white space, and don’t look back at what you’ve written till it’s done – I revisited the contemporary romance I’d planned at uni. The hero was originally supposed to be an aristocrat. Well, the grown-up me had no time for aristocrats but a great love of vintage film, so instead he became a talented film director. My feisty reporter morphed from a confident woman advanced in her career to an intern struggling to make her mark in the world of journalism. And when I’d written my little heart out through October and November 2015, I had the first draft of my first novel: The Honey Trap.

I won’t lie: when I first looked back at it, it seemed like meandering drivel of the worst kind. But after taking a few passes at editing, trimming off the flaccid areas, I was left with something that didn’t seem too bad. So I recruited a couple of friends and some fellow writers to beta read for me, made some more changes based on their feedback, and finally what I had seemed… well, still just ok, to be honest. But my beta readers seemed to have enjoyed it, and by the time you read your work back for the tenth time it’s hard to get any perspective on how good or bad it is.

It was at that point I realised the manuscript had gone as far as I could take it, and on a mad whim decided to submit to HarperImpulse, the digital first romance imprint from HarperCollins, which was open to unagented submissions. I think my most realistic hope at that point was they would read the MS – their website said they read everything submitted – and maybe provide some useful feedback for further edits in their rejection.

What I didn’t expect was the email I opened from Samantha Gale and Charlotte Ledger on the HarperImpulse team about six weeks later, in February 2016. An email full of praise. An email saying they would be thrilled – yes, that very word, thrilled – to publish The Honey Trap on their list with a few revisions. And of course I got right back to them and said I’d be thrilled too, went home, drank prosecco with ‘im indoors and celebrated my first soon-to-be-published novel.

And I probably lived happily ever after, or I will once I finally wake up…